What are the chances of my finding Jeanette Winterson‘s Oranges Are Not the Only Fruit in a grimy underpass “bookstore” in City Hall sold by a grungy man in rimless glasses who speaks of Barthes and Foucault like they’re his San Mig buddies? Not very many, to be sure, and the postmodern Winterson would have applauded, I think, the quirky contexts through which her books get into her readers’ hands. Fully Booked is, er, not the only bookstore!

So there I was, inspecting this stumbled-upon treasure of Winterson’s first novel I got for less than a hundred pesos, never mind that signs of (forgivable) water-damage snaking along its spine peer through the brittle plastic wrapper. Truly, treasures are found in the most unlikely places. Speaking of which, Winterson’s discovery of her “unorthodox sexuality” among seriously religious people of the Society of the Lost could not have been more out of place than if she had discovered that Pastor Spratt, a revered Pentecostal minister was the Devil Incarnate himself!

But I’m getting ahead of myself.

A bildungsroman, or a coming-of-age story, Oranges is the story of a precocious and spiritual girl who at seven started writing her own sermons. She loved the Lord with a passion. Raised in an avowedly and fiercely religious household by a hypocritical mother (who was not even her biological mother, thank Gaea!), Jeanette, (the character, not the author) grew up on the Bible and Jane Eyre and Malory’s Le Morte d’Arthur, and so, unsurprisingly, the plan of the novel harks back to this earlier reality of missionary work, Bible study sessions, God-fearing flocks. (Beginning with Genesis, and ending with Ruth, the novel contains biblical allusions, Anglo-Saxon myths, even fables that intrude into the central plot, in true postmodern fashion.) At 16, she was forced out of her mother’s house when, after public pray-overs, rites of exorcism, even solitary confinement in her room without food for days on end, she still would not renounce her “unnatural passion” for a girl named Melanie. Familiar stories of prepubescent male gays dunked in tubs of water by murderous fathers in this side of the hemisphere come to mind.

Bent double under the weight of so much institutionalized but bogus spirituality, the protagonist Jeanette abandons her Church, works odd jobs to support herself, takes up with another woman, Katy, and comes full circle by returning home years later to her adoptive mother, and finds that not much had changed by way of tolerance. Conflating the story of Lot’s wife in the burning of Sodom and Gomorrah with Melanie who went back to “compulsory heterosexuality”, Jeanette says,

Pillars hold things up, and salt keeps things clean, but it’s a poor exchange for losing your self. People do go back, but they don’t survive, because two realities are claiming them at the same time.

and we know that her battle to get over her is far from over. Dear God. Please rid me of this pointless, meaningless, ridiculous desire for her who does not deserve me.

The improbably comic Winterson, (forbidding demeanor in the novel’s cover notwithstanding) whose Sexing the Cherry and The Passion are now staples in Lit Crit classes, admits in an interview that “You write from a wound … There is a place in you that won’t heal,” and this is the source of much of the wisdom that spills out of the pages of the book. The story thrives on Winterson’s wit, acerbic humor, and flat-out honesty for being unreservedly gay, which she believes is not incompatible with her love for God:

But where was God now, with heaven full of astronauts, and the Lord overthrown? I miss God. I miss the company of someone utterly loyal. I still don’t think of God as my betrayer. The servants of God, yes, but servants by their very nature betray. I miss God who was my friend. I don’t even know if God exists, but I do know that if God is your emotional role model, very few human relationships will match up to it. I have an idea that one day it might be possible, I thought once it had become possible, and that glimpse has set me wandering, trying to find the balance between earth and sky.… (Emphasis added.)

And you cannot not sniff.

Readers will find a hard time seeing the novel as NOT autobiographical, since it shares many similar facets with the life of Jeanette, the author, whose own experience speaks of a stultifying religious household presided over by an emotionally unavailable mother as well. Besides, far too many passages cut too close to home for them to be seen as anything other than autobiographical—the pain that radiates out of the pages of the novel is too authentic as to be embarrassing: Seeing Melanie in her domestic bliss, pregnant and pushing a pram, she wanted “to shake her, to pull off all my clothes in the middle of the street and yell, `Remember this body?” when Melanie proclaimed to her that “those sorts of feeling were dead”. Jeanette rails against denial, falsity, inconstancy, and who wouldn’t?

I’m not sure how long this makeshift bookstore in City Hall underpass will remain in business, but except for its unTrumpian address, it carries some of the most remarkable titles, at one fourth the price of books in popular bookstores.

Mullan, John. “True Stories: John Mullan on disentangling fiction from autobiography in Jeanette Winterson’s Oranges Are Not the Only Fruit.” The Guardian 27 October 2007. 4 May 2012. http://www.guardian.co.uk/books/2007/oct/27/jeanettewinterson

Winterson, Jeanette. Oranges Are Not the Only Fruit. New York: Grove Press, 1985.

2 thoughts on “Winterson’s Oranges and Lovers” 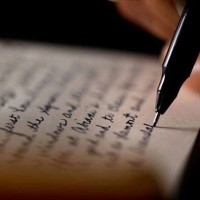 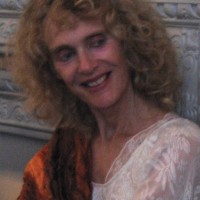 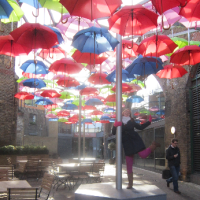 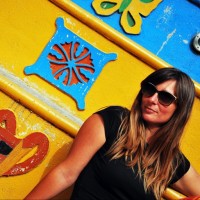